Having risen to all the challenges of a very difficult year, York’s amazing indie traders have teamed up for a magical, spooky and safe event to entertain all ages this half term.

Members of Indie York are staging a Ghost Hunt – and nine treasure trails across the city centre – all through the half term holiday, from Saturday (24 October)..

And many of the city’s most famous attractions are taking part too.

Polly Bennet from Indie York said “The Jorvik Viking Centre, Barley Hall, Merchant Adventurers’ Hall, York’s Chocolate Story and The Bar Convent are all taking part in the trail, helping visitors to discover and resident to rediscover the great places there are in York’s city centre as well as the wonderful independent businesses there are around the city.”

See how many of the hidden treasures you can find and you could win a great prize. Prizes include a £500 bike, a holiday weekend and nine £50 York Gift Cards. 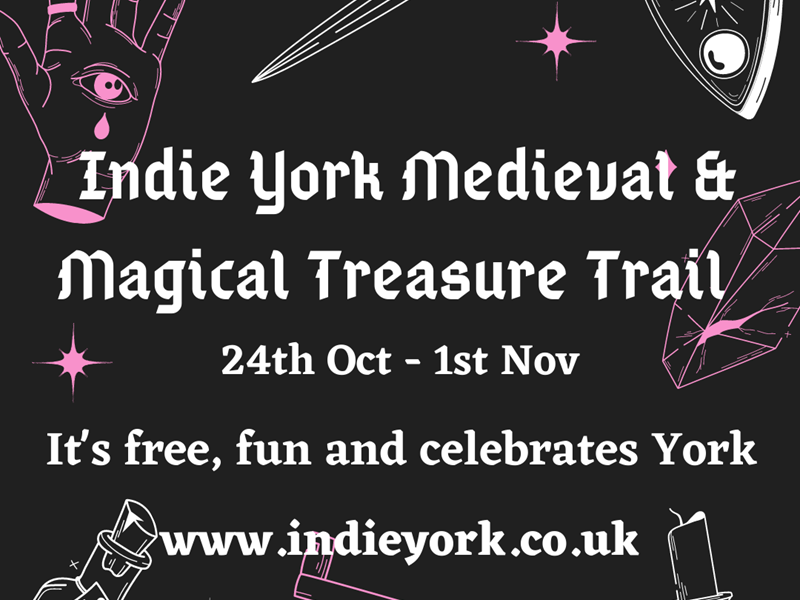 There are nine treasure trails to choose from, all detailed on a special map (see below). You can do as many or as few trails as you like.

There will be clues and mystery objects in the windows of participating businesses. Solve the clues and email in the answers on a photo to [email protected] to be entered into a prize draw for a chance to win one of the brilliant prizes.

The York Ghost Merchants have hidden 13 ghosts in the style of medieval woodcuts in windows in and around Shambles.

Can you find them all? Pick up your map to find all the businesses taking part.

There’s one map for the treasure trail, and another for the ghost hunt. You can pick them up from Indie York members or the Visit York centre on Museum Street.

With footfall and trade further affected by York being placed in the Tier 2 level of restrictions from last Saturday, indie businesses need the support of local people more than ever.

“Our independent traders are the lifeblood of York,” Johnny Hayes, chairman of Indie York, told YorkMix.

“They’ve risen to the challenges of this year with incredible creativity, determination and hard work.

“Now York has gone into further restrictions, they need local shoppers more than ever.

“The trail encourages people of all ages to get out in the fresh air, have some fun – and support their York businesses.

“And there are some great prizes too!”

The event has been put on with the support of City of York Council, Make it York, York Business Improvement District (York BID) and other sponsors including Bootham School and Redmayne Bentley.